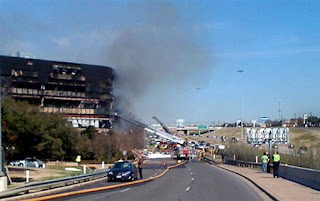 'Pilot crashes into Texas building': I know it's oldish news - so last week right ? But when I saw this title on the news last week and this type of footage (source for photo on right) on TV with another American building on fire...I confess I was waiting for the word 'Arab' and 'Muslim' to spring up, not because this is what people who belong to this classification do best but because the world has become accustomed to hearing this connection from media whenever something happens :)

Imagine my 'joy' on hearing that it's only a 'white' guy who did this... and he is alleged to have stated on his website that "Violence not only is the answer, it is the only answer..." very balanced indeed. So John Stack went ballistic because of taxes !

I have yet to see hatred towards him or any reaction from the world, in fact he is not newsworthy anymore...but he did crash a plane into a building right ? so does this count as terrorism? Will his family members and neighbours be forever labeled with shame? I would like to know his religion- why is that not mentioned ? Or maybe soon we will hear that he was visiting a mosque, had traveled to Yemen and was donating money to a 'madrasa' in Pakistan.

I dread to think what would happen if he turned out to have had even bought a Shawarma or Falafel or eaten Couscous within the last 10 years :) * Can you imagine the scenario?

Sigh I guess it's just the double standards as usual .

* Or maybe not? because these are claimed to be favourite staples by Israelis , but this post is not about them :P so if you want to read more check Anglo Libyan's blog !

Surviving and Living as a preventative measure

" Dragan doesn't want to go to Italy. He misses his wife and son, but he isn't Italian and he never will be. There is no country he can go to where he won't be from Sarajevo. This is his home, and this is the city he wants to be in. He doesn't want to live under siege for the rest of his life, but to abandon the city to the men on the hills would mean that he would be forever homeless. As long as he's here, and as long as he can keep his fear of death from blinding him to what's left of a world he once loved and could love again, then there's still hope that one day he will be able to walk openly down the streets of this city with his wife and son, sit in a restaurant and eat a meal, browse the windows of shops, free from the men wit guns." [p.161 - Atlantic Books London - 2008]

" [..] civilisation isn't a thing that you build and then there it is, you have it forever. It needs to be built constantly, recreated daily [...] As long as there's war, life is a preventative measure." [p216 - Atlantic Books London - 2008]

Having recently completed reading " The Cellist of Sarajevo", I noticed how the mosaic of emotions, ideas and representations recounted in the novel could be applied to any war torn country but the excerpt from page 161 simply screamed Palestine. I salute the Palestinian people for their steadfastness!

I highly recommend this book, it is gripping, and the best part is that the author, Steven Galloway did not use labels such as Serb, Muslim etc..

Guantanamo and Abu Ghraib, both brainchildren of the military adventure of a Western democracy into a far away land are the events which have brought to the forefront of the news the ethics of prisoner treatment and professional interrogation techniques.

That Britain and the US can discuss these topics 'democratically', disclosing and admitting at times that a terrible injustice may have been dealt to inmates and undertaking a few reforms here and there is admirable and is perhaps the reason why they feel they are able to lecture and train other 'less advanced' countries on international prison management standards in penitentiary institutions.


However, I find it hard to believe that anyone in the world is naive enough to think that there is something called 'good condition of imprisonment', or that there is no abuse in a prison environment. Even in an experimental environment there is large scope for mismanagement of inmates. I may have probably mentioned the Stanford experiment before but I find it fascinating, as this is human nature and the human nature given the right set of circumstances can transform an individual or individuals en masse into 'willing perpetrators or victims of evil'.

Knowing all this why would anyone be shocked at the latest emerging news about the post 9/11 world in which MI5 is accused of covering up the 'alleged' torture of " Ethiopian-born Mr Mohamed, 31[..] at the behest of US authorities after his detention in Pakistan in 2002. [...]The MPs said allegations that MI5 officers were "careless in their observance of their obligations towards the human rights of detainees"".

If people are wiling to hurt their own kind in ordinary/civilian prison environments, what do you think happens if they are given the authority over people from a different colour, religion and country than their own and especially in the context of war on terror ?

Come on let's be real ...what lies beneath in any prison system or non system on any spot on earth is worse than even our wildest dreams. Any one doing time is not rehabilitated but probably would not want to go back there simply from fear. Fear is what conditions one to keep remaining a willing victim or take the alternative path and seek vengeance.

So people stop thinking that morals in the west are higher and then feel outraged about rendition or anything else. This is all standard and 'normal' procedure in matters of national security..... and abuse is and will always be normal in any system where individuals will have any authority over anyone.

"Palestinian resistance and persistence is growing fierce rather than weakening. As an IDF intelligence general predicted already at the first Intifada. ‘In order to win, all Palestinians have to do is to survive’. They survive and they are indeed winning."

Read the above on a blog last year and came across again today.

The Wolf and the Vampire

Being loved by a werewolf AND a vampire has been my teenage fantasy.
This movie made me feel 16 again... I can't make up my mind who I want : Jacob or Edward? They symbolizes two types of extremely attractive males....

I think I will be buying the books soon to relish the feeling... 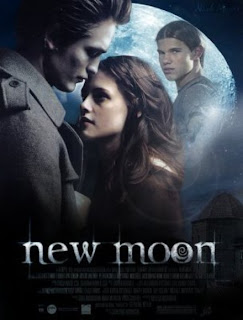