The evisceration of Libya 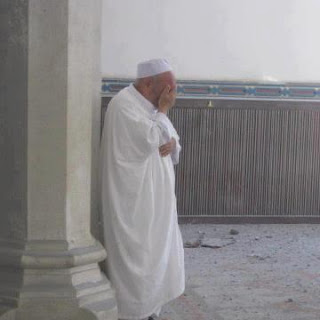 [source] please note I could not find any copyright for this photo as I took it from the Facebook page in the link.

If you don't care about your history, you have no future and our history is now a pile of rubble thanks to our simpletons who listen to Saudi clerics as they are now 'free' to do so!
May God forgive us Libyans for burning our ancient libraries, desecrating our dead and razing our sanctuaries and mosques. If we have been able to do it then no one should be blaming anyone for 'offending' Islam.

I'm beginning to wonder if we may have  deserved Gaddafi for all our sins... His death may have been deliverance for him from our evil? His death has unleashed the sleeping virus. ( I won't say dragon as dragon is a noble creature).
Today as some of the pillars of Libyan identity are being extinguished one by one the feeling of helplessness cannot be described. The dark ages are upon us.
Posted by Highlander at 8/29/2012 02:21:00 AM 4 comments: Links to this post

Following the liberation of Libya from the Gaddafi stranglehold  a new 'sport' or hobby has become fashionable over the past few months and reached its climax this weekend.

Historic Muslim landmarks are being wiped out, libraries burnt, tombs desecrated and  mosques demolished and looted. This behaviour is so alien in Libya that people are in shock and the voices trying to stop this organized crime against humanity are outgunned and outnumbered. They epitomize courage, I would have chickened out.

"“I do not know who those bearded men were. We have never seen them before, but they were calling us infidels and every insult you can imagine. It was disgusting.”" [ref]

May God protect Libya and give its people the necessary strength and patience as this is going to be a long haul.

A new kind of fear in Libya

In the Gaddafi era the living had ample reason to fear, in the new Libya the living and the dead live in fear from now on .. Or do they? This fear is pervasive it makes grown men tremble while hundred year old  heritage is razed to the grownd.

Freedom for whom in Libya?

There is so much to be optimistic about in Libya but more and more incidents are cause for concern.
Once you start feeling that you cannot criticize anymore then there is something wrong.

There is some debate about the role of Libyan women .. their role during the  Feb 17 revolution was appreciated as long as they cooked and did first aid and volunteered as medics or to wash clothes. However, once the war was over and women wanted to start wanting to put legal framework for their activity and citizenship they find that even some of the actions widely applauded during the revolution are now turned against them. They are arrested or kidnapped for having a voice and this makes them fear the rape weapon or the loss of reputation weapon which was allegedly wielded during the conflict last year. The rumour mill is very thick but working with an NGO  or being outspoken could get you in trouble  it seems.

Human rights have been 'lacking' in Libya during the colonial period, during the monarchy and  during the Gaddafi era while in post Gaddafi have proven to be disappointing and Libyans have been patient thinking that this is new to us  and we are learning. But there is nothing 'new' about ethics and morality Libyans either have it or don't - if we only acted according to the precepts of the Muslim religion that would be sufficient  but no one has acted according to these precepts since the death of Prophet Mohamed PBUH. The situation in Libya has become  kind of scary because with Gaddafi we knew the red lines and there were some society red lines as well but now all lines are confused.

Male and female have a long fight ahead but in a patriarchal society females will have it tougher because many males will take a shortcut and say 'we told you so - keep to women related topics only,  now is not the time for women to assert their rights (even those provided by Sharia? ) now is the time to rebuild the country don't mix the message and let us men get on with i't.

But how can you  alone rebuild the country if women are more than 1/2 the population and they have the higher percentage in higher education ?How can we rebuild a country without our sisters, mothers, daughters, cousins, grandmothers ?