Just as the muezzin had finished calling for the dawn prayer her eyes finally glazed over after a night of agony. I started to unfold the large blue kitchen tablecloth and holding her up slowly from her feet and arms, I gently placed her on the cloth then proceeded to wrap her in it (she will be buried later that day).

A this point I allowed myself to cry out all the feelings I've holed up for the last weeks, because no matter how much you prepare yourself for imminent loss.
Being in the presence of a soul that is dying is not only solemn you actually feel the cold creeping in and become close to a near death experience. You are brought face to face with all the questions that you usually repress at the back of your mind.

Why we are on this earth and what happens after we die? Is dying painful or is it a release as we would like to think?

The incredible sadness of the loss is tearing your heart out. In her case it was tearing my heart several times until dawn. Each time I would think she has exhaled the last sigh and last breath. She wakes up again looks at me with forlorn expression, screams in pain, kicks her legs, opens her jaws to the point of breaking, yawns and makes a unearthly sound from the deepest part of her throat and stops breathing. The last heave was the strongest.. I did not know it was possible for a soul to take so long to die… nine hours –. No amount of calling the veterinary or Adib was this time going to change anything.

Whoever said that cats had nine lives is right! I spent nine hours helplessly watching her die, nine times over.

It's been a while now since she has left us hopefully to a better place, yet I still hear her bell on the stairs at night, and I still think she is sitting near the heater. I still call her in the morning then remember that I don't need to fill the bowl of food anymore, and the bed is very very cold without her cuddling on my feet.

Pet loss and all the emotions entailed are acknowledged in the literature and with a variety of coping mechanisms.

I find myself agreeing with this statement: "For someone who has truly loved a pet, however, the loss of that animal can feel just as devastating as a human loss, if not more. The very things that make animals different than humans often make them more endearing. An animal who doesn’t talk can’t pass judgment or give you the silent treatment or withhold companionship and love. For many, pets provide a source of unwavering love, affection and companionship. The qualities of a beloved pet are hard to match in human form. The loss of that companion can be heartbreaking."

This again led me to think that if I felt that much pain for my longtime pet, how much are parents feeling for the loss of their child. I think what made her death even more intolerable and led me into a downward spiral is that it came at the time when the recent 22 day war on Gaza was taking place so I could only focus on daily death toll from that attack and every photo of the injured or dead especially children became unbearable.

Some families lost more than one child. I shudder and can only imagine by proxy the pain of feeling helpless for your own child. You have given birth and raised him/her only to have that erased in a jiffy. 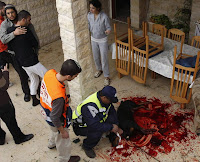 I also discovered that both camps cared about their pets as well in the middle of the carnage.

and the Palestinians who despite sustaining a heavy death (if I believe the news it is 13:1300) were able to attempt to save some pets. ( see photos right and left)

The most obvious lesson that I learned from my dying cat is that DEATH is inevitable and we are ALONE when we die; it is also extremely painful for the dying and for those left behind - regardless of the process being swift or protracted.

It was also one more death in the family that needed to be promptly dealt with 2006, 2007, 2008, 2009 it looks like everyone is dying all of a sudden and there is no time to stop and grieve because the emotional toll would paralyze you.

I also remembered impending death, a painful realization consciously accepted a while back, there was no way to avoid the mental anguish. Will it be lonely, peaceful or messy? Denial was never an option.

Where are those nine lives when you need them ?

Support a Gazan, international calls are free to Gaza!

Global Voices Online recently reported that "Bloggers are calling upon their readers to pick up the phone - and call the residents of Gaza to show them support." Check the post and support the bloggers as well.

This is a super idea, and comes to reinforce the generous step that the General Posts and Telecommunications Co (GPTC) in Libya had taken..

We received an sms on January 7th, informing us that in solidarity with Gaza, calls to the Palestinian Territories will be free of charge from any landline or mobile in Libya from now until the end of February 2009!

I have several Palestinian friends but I never dare call them because their number starts with +972 which is the code for Israel so we chat on skype instead.

I know that the Palestinian Territories have been assigned their own international code of +970 a few years ago but had no idea how widespread it was as there was some controversy and objection over that.

Ordinary Libyans and Palestinians living in Libya have made use of the GPTC offer and phoned their families and friends or even made random calls, some and I have first hand report of that have even fallen in love with someone at the other end. Amidst all the carnage there is still hope.

What are you waiting for ? go and pick up that phone

"A bleeding homeland of a bleeding people"

I have been trying to avoid making such a post since before Israel began pounding Gaza a week ago. This post is not about who started what when or whether the egg came before the chicken and the whole painful story spanning over six decades. It only brings bitterness, and I no longer have hopes for a swift and just solution (so I won't talk about that). I won't even draw parallels between Gaza 08/09, Lebanon 2006 and Iraq 2003.

What I'm sure of is that Palestine more than any place in the world evokes strong connotations in the Arab world. As someone paraphrasing the famous Palestinian poet Mahmoud Darwish said "Palestine is [..] a metaphor - for the loss of Eden, for the sorrows of dispossession and exile, for the declining power of the Arab world in its dealings with the West."


In this context, Libyan cities have witnessed a number of demonstrations in solidarity with the Palestinian people, the latest of which took place this morning in Tripoli.

Moreover, Libya has always been generous with its aid. Suffice it to say that it was the first Arab country that in defiance of the sanctions imposed on Gaza since 2007 attempted to send a boat to the Gaza strip last year only to be ordered back by Israeli warships with the advice from Israeli foreign ministry spokesman Yigal Palmor that "anyone wishing to transfer humanitarian aid into Gaza is welcome to do it in coordination with Israel and through the regular crossings. They can also contact Egypt."
This time Libya heeded this advice and sent planeloads of humanitarian aid via Egypt, that were barred on December 28 from landing, probably until further clearance is obtained from the necessary authorities in Israel, Egypt and maybe the USA. I did not follow the diplomacy at work behind the scenes but I'm relieved to read that the next day whatever problem was seemed to have been resolved and the consignment was delivered thereby forming the first link to a chain of aid over the next days.I hope it does reach the Gazan people as it gives one the selfish feeling that at least we are doing something.

As the blood once again spills into our living rooms - especially now with the ground assault that started on the evening of Saturday 3rd January, emotions are consequently running high in our region, with tolerance levels sometimes verging on the non-existent.

It will serve no purpose to mention casualties and body count from the Palestinian side in this latest episode because numbers are always ridiculously and unbearably high, and I'm sure someone else has already recorded them.

Hence, whilst all 32 dead and 600 wounded Israelis and their families, victims of Palestinian rockets since 2001 up to now do get my sympathy and while I do understand the plight of those Israelis suffering post traumatic stress syndrome, having been myself exposed to a relatively limited but intense experience 22 years ago; I must admit that the plight of the Gazans who I'm sure are now beyond 'mere' PTSS strikes a totally different chord not only within me but within many others.

In this regard Darwish's 1988 poem "O those who pass between fleeting words" which I always associate with any occupying army ( so do not dare call me anti-Semitic!) has been playing not only on my Ipod for the last two years but also in my head. To me it has a timeless quality and the metaphors so beloved by Mahmoud Darwish make it possible depending on one's mood to be interpreted or misinterpreted.
Below is one English translation from "Intifada: The Palestinian Uprising Against Israeli Occupation", courtesy of the following gentlemen: Zachary Lockman and Joel Beinin.

O THOSE WHO PASS BETWEEN FLEETING WORDS

0 those who pass between fleeting words
carry your names, and be gone
Rid our time of your hours, and be gone
Steal what you will from the blueness of the sea and the sand of memory
Take what pictures you will, so that you understand
That which you never will:
How a stone from our land builds the ceiling of our sky.

0 those who pass between fleeting words
As bitter dust, go where you wish, but
Do not pass between us like flying insects
For we have work to do in our lands
We have wheat to grow which we water with our bodies' dew
We have that which does not please you here
Stones or partridges
So take the past if you wish to the antiquities market
And return the skeleton to the hoopoe, if you wish,
On a clay platter
We have that which does not please you: we have the future
And we have things to do in our land.

0 those who pass between fleeting words
Pile your illusions in a deserted pit, and be gone
Return the hand of time to the law of the golden calf
Or to the time of the revolver's music
For we have that which does not please you here, so be gone
And we have what you lack
A bleeding homeland of a bleeding people
A homeland fit for oblivion or memory


For my Arabic speaking readers here is the link for عابرون في كلام عابر and a bonus link for those of you who may also want to enjoy it in Syrian diva Assala Nasri's voice.