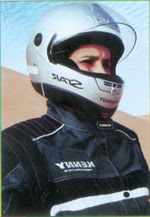 Browsing through the March issue of one of my favourite Libyan glossy magazines Albayt ( click here for the online version ), I was pleasantly surprised to see a Libyan woman participating in a car race ; namely the Butterly Rally for Ladies a desert rally held in Tunisia this year.

<= this photo of Karima courtesy of Albayt.

According to jounalist Mohamed Zurgani who interviewed her for Albayt, Karima Yaacoub is a lively, spontaneous person with an adventurous nature. Karima loves speed and has always dreamt of taking part in international events since as far as she can remember. 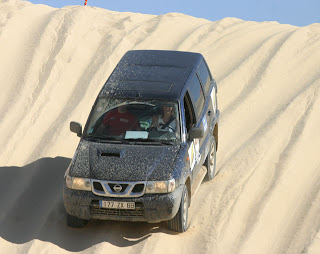 From the official website for the event 'Rally des
Papillons' I discovered that this event has been an annual affair since 2004.
The website is rich in photos, media appearances etc... (hotties guaranteed for the 'shallow' among us he he he).
Don't go trying the above feat yourself, it's very dangerous trust me LOL. 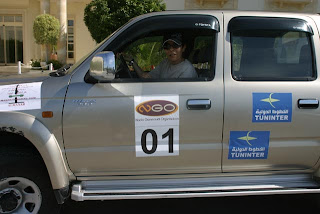 Karima's dream has finally come true by being the first Libyan woman to participate in a car race.

Team Libya made up of her and copilote Nasser Hawas reached 4th place in the top five classification. 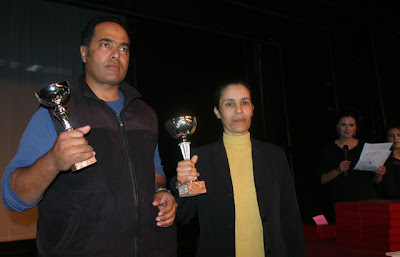 Did I not say before that Libyan women rock :P!
Update 23-08-2007
Thanks Braveheart for bringing to my attention that Karima came second in the recent Morocco Rallye (Casablanca). Another source here. She is getting better!
Posted by Highlander at 8/17/2007 05:00:00 PM

Email ThisBlogThis!Share to TwitterShare to FacebookShare to Pinterest
Labels: Libya

Not only does the sister participate in a desert race. She´s also got a MAN to climb out of the car and shovel the sand away from the tires when stuck in a ghibli ROTFL

Kudos to Karima and Mabrook to her team .... thanks for bringing it up Highlander, otherwise I would never have heard about it.

Ph you are welcome, lots of things need to be recognised more in the media not just the usual stories :P

Karima's dream has finally come true by being the first Libyan woman to participate in a car race.

Ummmmm. She is most DEFINATLY not first Libyan Woman to be involved in a "car race". I know this for a fact.lol.

Yeah that is cool. I love women, the Sahara and racing (in that particular order).

Now, on a Western beat, a race for women?? I hope that the Arab women will soon be able to race together with the men.

Where have they been hiding all these years? ;-)

You go girl, show it to the world that women can do just as well or even better. Ahaha

Hey, H
sounds as if you've had a desert escapade of your own! Only the strong physically, mentally & spiritually can survive.

Safia, I can imagine the situation :lol:

felicitations, hehe, the women haven't yet said their last word !

I wonder if this evenment is related in our medias

Congratulations for Karima and for us as libyan.
Things changed with libyan women.
i dont` know what we are going to see in the futuer.

Thank you for the story, highlander. Put a very proud smile on my face...Libyan women really are something, no?

you know H, one of my conditions in my future wife, she must drive and her MAHER will be a car, but i dont want Rally driver, because i think she will drive us to the jana very quick.
i have some update, she got the second place in Moroco competition this month. check this link
http://www.libya-alyoum.com/look/article.tpl?IdLanguage=17&IdPublication=1&NrArticle=9789&NrIssue=1&NrSection=9

Dear All I won't be able to post for a while. I can read comments and make comments only because of this :

"Blogger's spam-prevention robots have detected that your blog has characteristics of a spam blog. (What's a spam blog?) Since you're an actual person reading this, your blog is probably not a spam blog. Automated spam detection is inherently fuzzy, and we sincerely apologize for this false positive.
You won't be able to publish posts to your blog until one of our humans reviews it and verifies that it is not a spam blog. Please fill out the form below to get a review. We'll take a look at your blog and unlock it in less than two business days.
If we don't hear from you, though, we will remove your blog from Blog*Spot within a few weeks.
We'll contact you after we review your blog."

Not sure what it means but it would be sad to loose my blog.
Wish me luck.

Good luck, Highlander. Can you give us some contact info for somebody to complain to about this? I'm good at complaining, and this pisses me off.

Turns out all that has to be done to get the ‘spam’ designation for a particular blog is to make a complaint to the blogger powers that be. The same applies to having google bury direct links to a particular blogs.

What happens is that one troll may use different emails/IP addresses to build up a series of complaints to which google will respond.

By the way, don’t forget that google owns blogger — and no doubt, they may have synchronized some of this stuff.

Still looking for a way to complain.

It's the "Flag as Objectionable" option up there on the toolbar, next to "search blog". It's happening to a lot of people. All it takes is one troll complainer to spam complaints.


Isn't it ironic that Google's solution to "spam blogs" was to implement a feature that allows trolls to spam complain?

With no human supervision at all from Google.

Apparently finding an e-mail address to complain to Google is akin to finding the Holy Grail.

don't worry they do that aleatory, a couple of years ago I had the same adventure, you just have to fill their form and it will soon be OK

HL, I think that you probably can save your blog. If you start a fresh new blog at for example wordpress, I think that it is possible to "import" from other blogs. I think this is exactly what Red did.

Craig, yeah I am feeling really ambivalent about Big Goog. There is such stuff as this crud here, privacy invasion and China.
On the other hand they keep putting out some really amazing stuff, way beyond searching:
Google Maps with the new 360 street views. Check NYC!
Spreadsheets: Excel in your browser.

But I am not overjoyed by their fantastic work theyve done to the "usability" of blogspot after acquiring it. Perhaps we all should join Red at wordpress.

I will protest, and lead a one million Libyan Man/Women march, in front of google headquarter's.


Craig please dont link neo-nazi site's like "gates of veinna". I feel uncomfortable with that type of hatred being present on the thread.
Thanx


one of my conditions in my future wife, she must drive and her MAHER will be a car

Dude thats like saying one of my condition's is that she must cook and her maher will be a pot and pan:P

Sorry to break it u bud, but the ladies want the bling bling.:))
http://diamonds.thefactoryoutlet.com/images/template/diamonds-cobb.gif

mabrouk and well done to the Libyan ladies, I couldnt be more proud and thank you highlander for this as I didnt know anything about it :o)

LOL Adam I'm glad you put women on the top of your list! As for a race for women apparently men are allowed to participate too, this race is for a good cause :P go read the link and see how it came about :)

Red, yes I'm so excited as I thought I was crazy until I saw someone with even crazier dreams!

Nomad :), I'm not sure it has been related in the French media, or at least not prominently. Although the lady who won seems to be married to a French guy or vice versa ?

Hibo :) well nothing surprises me and I'm glad that Libyans are getting more exposure in the media for their accomplishments.

Smokey habibti I always say that Libyan women are number 1 :)

Braveheart thank you :) I just updated the post now that my blog has been unblocked.

Misratia :) thanks me is proud too!

By the way Braveheart what kind of car are you offering for maher ?

Hi Craig :), thanks for the input regarding the blog, it's good to know I was not the only one.

I'm sure your complaint and Lost Libyano's demonstration helped in the prompt re-establishment of my blog LOL.

Nomad thanks:) yes I filled the form!

Adam did Red have the same problem? is that why she migrated?

Lost Libyano if the maher is a BMW 2007 4x4 car I would not say no :P I can get the bling later anyway LOL

AngloLibyan :) thanks I knew you would like it- welcome back brother

There seems to be quite a dissonance in Blogger's policy. On one hand, they lock blogs practically for nothing. On the other hand, I recently complained to them about a particular blog. I am all for free speech, but when a blogger posts nude-butts photos of another person without her consent, I think this goes a bit too much and somebody must do something.
I not only flagged the blog but found what Programmer Craig called the "holy grail" and e-mailed Blogger. Here is a copy of their reply:
"Hi there, Thank you for your message. Please note that Blogger is a provider of content creation tools, not a mediator of that content. We allow our users to create blogs, but we don't make any claims about the content of these pages. We strongly believe in freedom of expression, even if a blog contains unappealing or distasteful content or presents unpopular viewpoints. We realize this may be frustrating and we regret any inconvenience this may cause you. Given these facts, and pursuant with section 230(c) of the Communications Decency Act, Blogger does not remove allegedly defamatory, libelous, or landerous material from Blogger.com or
BlogSpot.com. In cases where contact information for the author is listed on the page, we recommend you working directly with this person to have the content in question removed or changed. In cases where the author is anonymous, please note that in accordance with US state and federal law, it is Blogger's policy to only provide a user's contact information pursuant to a valid third party subpoena or other appropriate legal process.
Sincerely, The Blogger Team"

H,
I didn't face the same problem as you did, I moved as I was bored with blogger. I found a new home at wordpress.com and so far I am satisfied with my new abode. Come and join me. There's no hassle in importing your files from blogger to wordpress. Man, I hope blogger or google aren't going to bloc or ban me from visiting any blogspot blogs.

This girl rocks and so as her 4x4. Driving in sand could really be hard that is why you have to make sure that your car has a nice body lift kit for best performance

First Libyan woman car rally pilot is drive a car and paticipate in the competition. She is win the awards in the car racing competition.
------------
Salvage Car