It seems there is no running away from the prerequisite post about the London attacks since on the second anniversary of 7/7 a copycat bombing took place today in London. Like all decent people in the world be they atheists of believers , one must condemn such atrocity, and offer one's condolences to all those who lost loved ones . I admire the Londoner's spirit and stoicism . It was business as usual and there was no great panic or hysterical behaviour unlike 9/11 ( of course I'm aware that the scale was less enormous but death is death ).

On this same vein then , every life is precious, be it on a London bus , or on a Baghdad street, and I wish that the Iraqi victims of terrorism ( be it Western, foreign, state sponsored or homegrown) are remembered as well.

A collective RIP to victims all over the world.

Getting back to the London attacks, it seems that perpetrators of 7/7 were local British boys of Pakistani and Jamaican ( does not even have a Muslim name) ethicities , this is an internal problem that the local authorities should solve, if they are Muslim that does not mean that billions of Muslims worldwide should apologize. It's like saying that all Christians should apologize for the IRA bombings ?

So I shall not get apologetic and start talking how Islam is all about peace, the British have dealt with that admirably and they have not gone berseck and started stabbing Arabs or Sikh , or women with headscarve.

What I will do though is this petition wich I received by email today, I already signed and sent it , you can do the same as well. No matter how wrong the British or US policy has been in the Middle East, senseless murder of ordinary citizens is not a solution ( even though occupation forces have been guilty of that in Iraq). So here it is :

Today, I call upon all my Muslim brothers and sisters to stand up and be counted. We must tell these so-called Muslims (if what has been claimed by a group on an al-Qa'ida-related website is true) that they do not represent Islam or Muslims. We Muslims must shout out loud and clear:
"NOT IN MY NAME! "THIS PETITION IS GOING TO THE BRITISH PARLIAMENT AND THE BBC TO SAY, WE MUSLIMS DONT BELIEVE IN KILLING INNOCENT PEOPLE.

On a similar note I found this post by Iraqi-Canadian blogger Ihath quite fitting please read it here : Degrees of linkedness .


Karim Elsahi who seems to have a good head on his shoulder has come up with a nice idea, world wide prayer for peace , he calls it Pray 4 Peace . Please go check it and join if you wish. My friend T. was saying today' that if enough people prayed for peace toghether, something good should come out of it '

Karim also has a blog please also go check it at One Arab World and support his effort.


Mustapha from Beirut Spring has some great banners . Go and choose yours. I 've chosen this one. Congratulations Mustapha!

This banner from another site common dreams.org is also great you can order a whole bunch, go check their choices.

I must conclude the post as I started it, with the London blasts. When I was in Tripoli last week , all the Libyans I spoke with friends, neighbours colleagues, were pained about the attacks and immediately reached out to their foreign friends and colleagues, and many of them said a prayer for the victims. In Islam we believe that the prayer will reach the dead even if one is miles away. However, since I was in London , I decided to pay a visit to the memorial that has sprung up at Kings Cross and pray for the dead souls in person on my behalf and that of my Libyan compatriots. It was heartening to see all sorts of people and sobering to see so many messages of love. Here is one of my photos. 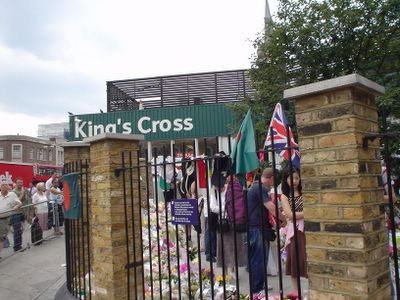 Karim, thanks for visiting here , I updated the link as per your request.
I am interested in your project yes, but not right now , I have some of my own to finish and take care off , so that is a deffered yes I guess ...

And today we hear of Egypt and Spain. Denmark thinks that it is second in line.

My God I wonder how does this amazing network of mentally retarded idiots manages to terrorize the whole world.

How the hell could they move so many bombs and explosives across borders despite massive security by renouned police systems like Scotlandiard, the FBI and the Egyptian police.

I bet you that the bomb mules are just the cat's pow in a huge global network run by Satan himself, or his apostels on earth.

Take good care Highlander and keep your movement to the minimum please.